Here is my account of my visit to fellow sculptor and ceramist Donna Chaney’s home and studio, for two days of working, sightseeing, and socializing.

Donna owns a picturesque farm on top of a ridge with stunning views, in Herefordshire, between Worcester and Hereford (both great small cities for visiting). This area is just so beautiful, even in winter. After the fairly flat Thames Valley, it was a refreshing change to be in a place of more dramatic scenery: rolling hill views with a classic England patchwork of farm fields and pastures, and pretty streams in the bottom of the valleys. 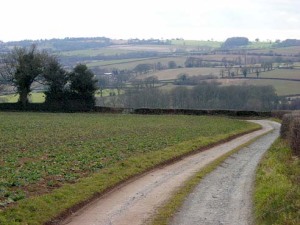 Here is Donna’s “driveway” and view roughly to the north

This is the view you get out of every window in her studio!
And this is in winter! It just takes your breath away in summer.

The mission for the visit was to show Donna and her painter Joanne how I airbrush-paint china horses using overglazes. Joanne paints all of Donna’s horse sculptures that are cast in earthenware, and uses underglazes. Donna’s other painter, Lorraine, is the specialist in finishing all the bone china pieces, using traditional chinapainting (overglaze) technique. I spent most of the day showing them how I make the airbrushable-liquid overglaze paints, and how it goes on. It has been a year since I have painted anything, and I had to remember a few things myself! I also brought along my air eraser, to show them how I spray away the overglaze paint to create the dapple greys. 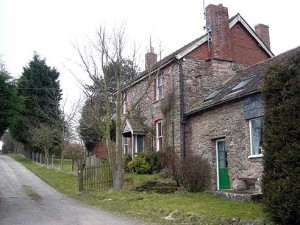 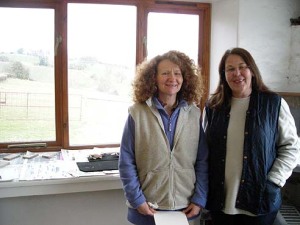 Donna and Joanne in the painting studio

Mark, Donna’s mold maker and casting master, who incidentally made all the molds for my sculptures. Without him I wouldn’t have had the joy of my work in ceramic these last 10 years! (Everyone calls him “Moldy Mark”.) 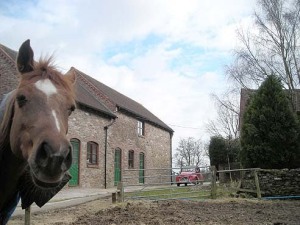 The converted stable block (where all the studios and workrooms are)… from Donna’s mare Foalie’s point of view in the paddock. She “talks” to everyone who walks past.
On Friday morning I took a drive due west and crossed the border into Wales. I was hoping to be able to spend a vacation week touring the parts of Wales we didn’t get to the first time we were in the UK. But now with our stay cut short by 9 months that’s not going to happen. So I decided I had to at least peek over there one more time. I drove into an area called the Brecon Beacons National Park, which had some higher mountains with valleys carved between them. It was threatening rain showers all day so the highest point I could see was shrouded in cloud. And you could still see some snow in the crevices! They aren’t the Rocky Mountains but beautiful in their own way, with farms all down the slopes. It does feel like a different country with all the signage in both Welsh and English. 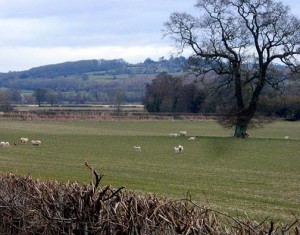 On the way west I stopped in Hay-on-Wye, a small town famous for hosting a huge book festival every year. It was pretty sleepy this March morning, and hard to imagine how they cope with thousands of book fans thronging their few small streets! They did have quite a few book stores but I was there too early in the morning and everything was closed. Just as well, as I didn’t really have the time to get lost for hours in a book store!

I joined Donna and her team for a couple more hours Friday afternoon, and then I went off for a look at a National Trust property near Worcester that Donna recommended, Witley Hall: 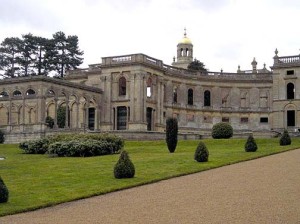 It is a typical not-huge 1800’s stately home… with a twist. It was gutted in a fire in the 1930’s and just left that way. Even though it’s not that old, it is just a roofless ruin open to the elements so parts of it look almost ancient-Rome with the classical columns growing weeds and lichen. The setting and grounds are stunning, which makes me wonder why it was given to the state rather than just scraped off and sold for someone else to build their palace on!

Friday night Donna and her partner Charles, Joanne and her partner Phil, and I, met back up for a totally fun dinner over at a pub/restaurant next to my hotel in Hereford. It is always entertaining to compare notes between our countries, resulting in a lot of laughs!

On Saturday I had intended to drive up to Birmingham to visit the famous Crufts dog show (the UK’s equivalent of our Westminster Kennel Club dog show), and see the Keeshond classes. But I woke up early and found I just wasn’t into it that morning. I was already missing my three Boyz and it was to be a beautiful weekend and I just wanted to get home and enjoy it with them. (I did see 3 days of top Kees’s last year at their National show in Colorado Springs, and I suppose that one dog show is pretty like another.) So I just drove home on a leisurely route through Gloucestershire and Oxfordshire, watching the sun slowly burn off the mist.