I realized I’m overdue for photos of the Boyz! Here they are in the snow yesterday. They are SOO happy that winter has finally arrived. They are overjoyed being able to play in the snow. Kit had a birthday in October so now he’s 4, and Kanab will be 3 in January. Kanab has matured and his coat has grown in, and now the two of them look so much alike that when I see them from the top or back, I often can’t tell who’s who: 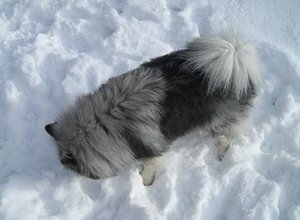 News from the going-to-England front.
We are in waiting mode for the British Gov. to approve Paul’s work visa. We can’t make any travel plans for him until that happens. It certainly is looking like he won’t be starting work over there on Jan 1st!

I did get the rabies-testing process going with the Boyz. You can’t take dogs into the UK unless they are proven to not have rabies. They got the initial blood test right before Thanksgiving, and they have to wait 6 months after that in order to fly. Just to make it more exciting, I learned that British Airways in Denver has a heat embargo on live cargo from June 1st to Sept 15th! I was really scrambling to get that bood test in November!! In order to get on their direct flight out of Denver that I was counting on, we now will have a window of about 3 days in which to all fly at the end of May. If we had waited even a few days before starting the rabies process, me and the Boyz would have to book on another airline to get to another city like Chicago, then connect to a BA flight without a summer heat restriction. I really really didn’t want to subject them to a plane change—the less opportunities for things to go wrong in the air travel process the better. I will finally relax when I’ve got my ticket and the dogs booked on that BA flight…!

I had to get a Mac laptop so that I can continue to do my health care mag every month while in the UK. We bought a used/refurbished powerbook G4 so that everything is exactly like my current desktop computer. It was brilliant of Paul to think of a used! You’d never know it wasn’t new, and it is actually about 5 times as fast and has more memory than my other one. Fortunately I can plug in my existing mouse and keyboard if I want. But I’m trying to train myself to use just the laptop. I just have to stop hitting the CAPS LOCK…! It’s so cool that thanks to the web my editor in Denver, my publisher in Santa Fe, my printer in Northern CO, and I, will still be able to work together as if I hadn’t moved!

We’re still thinking about options for whether to rent the house or not.
We came to the pretty startling realization that we don’t need to bring much to England with us besides a year’s worth of clothes! (And for me, that’s not much! Fashion-slave I ain’t!) We’re renting a furnished house, and all the small incidentals of life will simply be purchased over there. I won’t bother with things like hair dryer or a TV since they can’t use the same electrical current over there. For some reason I was sure we’d need to fill a cargo crate with our stuff. So it was pretty interesting to really look around rooms and realize that nothing but clothes, my computer stuff, some art tools and the dog’s things need go! I’ll have to do without all my collectibles and books, etc. I am a totally “low-maintenance” woman and easily travel all the time with just a backpack (the older I get the less I care what people think about how I look). This really isn’t all that different!

Don’t forget to participate in my little essay contest. The deadline is next week. There are 16 participants already and all are fun and interesting reads. And some nice prizes up for grabs!