Today marks the beginning of my 3rd week of life in the UK. I kept meaning to keep up with this blog better but wow the time passed quickly and then the longer it went the harder it would be to write about everything and I ended up putting it off each day!! But I’m writing this as much for a record I can come back to and read when I’m age 90 as for any other reason, therefore write I must!

In sum, I LOVE being here. Paul and I agree this was just the change we needed, at the right time in our lives. And we managed to pull it off without too many glitches overall. The house is perfect and comfortable, and the neighborhood is great.

Even more wonderful, I’ve learned that England is insanely great if you are a dog owner!! Unlike Boulder, who has an oppressive must-be-on-leash-or-big-fine law, there is no such thing here. And I checked all the local and regional municipal websites about it just to be sure because I couldn’t believe it. It seems that common sense and common courtesy regarding your dogs is the rule. There are also laws that landowners must allow public footpaths on their property, and because of that, fabulous walks with your dogs are everywhere. Here is our closest footpath: 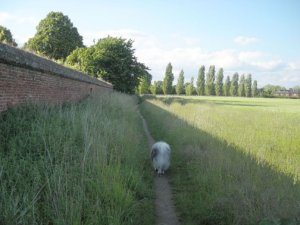 This farm is less than a quarter mile from our “housing estate”, and it leads to a public bridle path (complete with actual horses and riders, OMG!!), with this genuine Tudor-era house on the property:

It is just heaven to walk or go running with the Boyz here. We are out there every day. There is even a stream with a pool where KitKat can do his swimming, water-dog that he is!

Across the street from our front door is this little round park. It must be the “Green” from our street address “Heynes Green”, which rings this park: 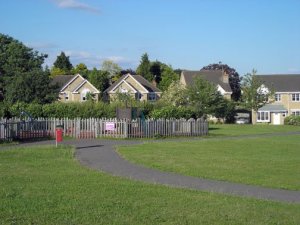 This photo is looking back at our house across the park (2nd roof from left). It has a playground for kids but is pretty much just grass, which is also super for the dogs to run around in. We discovered that we have English Hedgehogs! Kanab has spotted two of them in the backyard and in this park in the evenings. They just roll up in a ball and hope we go away! (We do.)

The village where we live has a lot of housing that I’m guessing has probably all been built in the last 30 years, so it’s not any sort of “twee” classic picturesque English village. It’s pretty modern and full of families with kids walking to the local schools in the morning. But… the housing styles still look clearly Brit. Which is nice because it constantly reminds me I’m in a new country. Here and there in town also are much older homes and cottages which the newer stuff must have grown up around over the years. We have a little shopping centre within 10 minutes walk, with a little grocery, news shop, hardware, and two restaurants. Here is one typical street we walk on to get to the shopping centre where I buy the newspaper every day:

And here is our “local”, the closest pub to our house: 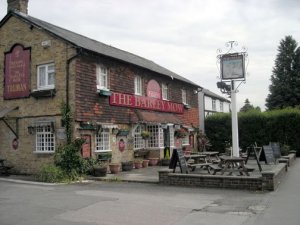 Maidenhead is pretty modern too, with a busy High Street shopping district. Readers of this blog will know how Significant it is that I have located the McDonald’s on the High Street: 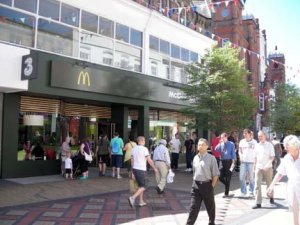 Maidenhead is right on the Thames River, and has a gorgeous river frontage, including a busy lock. We celebrated our 26th wedding anniversary on June 4th at a restaurant on the river, thrilled beyond belief that we are here! 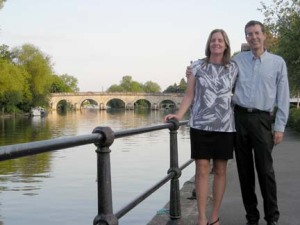 I am happy to report, that driving was not the Big Freak-Out I thought it was going to be. After one practice session with Paul one evening, I was driving on my own. The very worst thing is the narrow town streets, no shoulder at all, with parked cars on them. So you have to swerve into oncoming traffic’s lane. And those on the side who have to swerve, don’t seem to yield to you if you’re coming in the un-blocked lane! Crazy!! That is unnerving for a timid driver, especially since the #1 problem in learning the new car is that I have trouble gauging how far the left side of the car is from things over there. I’m sure it was like that when learning to drive in the US 30 years ago… but I don’t remember it! Overall I feel pretty confident about driving. I’ve driven solo quite a few places already including the 2 1/2 hour drive one-way, to Donna Chaney’s farm and studio over in Herefordshire on the Welsh border. I did that yesterday. More on that—and my start down the ceramics slip-casting path—in an upcoming post!

We’ve been putting our weekends to good tourist-use already. We started with a few cathedral towns: Canterbury and Winchester. We have “bagged” quite a few other UK cathedrals on our previous trips here, but these were two Musts on the list for sure. I love the story of St Thomas Becket and how great to finally see “his” cathedral. I think Winchester won the architecture beauty contest of the two. Here are two interior shots, one of each, Canterbury first and then Winchester: 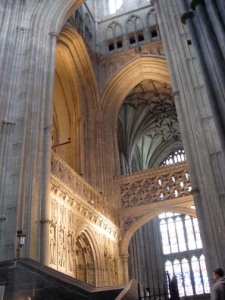 I am visually enthralled over and over with arches and ceilings in these massive ancient cathedrals all over the UK and Europe, doesn’t matter the style or era, I can’t get enough of the seeing of them. I keep taking photos like this, and always end up being disappointed that they can’t show the compelling shape and feel of the spaces created, as seen in person.

On the day we went to Canterbury we also drove a little further north to two little seaside towns on the Thames Estuary, so I got a little peak at the water: 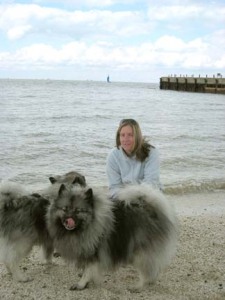 I’m dying to see the coastlines and the beaches here. We have booked a week in a cottage on the coast of Cornwall (at the very tip, near Land’s End) in mid-August. They say there are beaches there where you can play with your dogs. I can’t wait to see if I can get them to swim in the ocean. They’ll be in for a surprise when they try to drink the water, at least!

We drove north of London last weekend, to search out a church where one of my ancestors on my Mother’s side of the family was once the Rector in the 1600’s. It is called St Mary of the Virgin, in Walkern, Hertfordshire. The Gorsuch family tree traces back to here. I put my photos of this place on a webpage for my family. But here it is if you want to look: St Mary Walkern.

After Walkern we drove over to Cambridge and walked all around there on a busy Saturday. None of the Colleges were open to visitors I think because the term was over for the summer and celebrations etc. were being prepared. There were a number of art and farmer’s markets in town and a fair called “Gown and Country”.

We have been so lucky so far with the weather. We’ve had sunny days all 3 weekends, and I’ve been able to get out and explore my local area by bike and on foot during the week. This weekend I think we’ll take the train into London. This year is the 500th anniversary of King Henry VIII’s accession to the throne, and many places associated with his reign have special events and exhibits going on all summer. Tomorrow they are staging a Tudor-era boat flotilla/pageant down the Thames from the Tower to Hampton Court Palace which would be fun to see. And the Tate Modern just opened a new exhibition on the Futurism Movement of the early 1900’s which is on my list of Must Do.

It is finally starting to sink in, reinforced by reading the London Times every day, that we are right next to such world-class culture and I mean to see and do EVERYTHING! Trying to decipher their politics and government is a serious work in progress… but apparently we have arrived in very interesting times politically!

This coming week the Wimbledon tennis tournament begins, something we’ve always wanted to go see. They have a tickets lottery every March which we missed, but you can stand in line every day for grounds tickets, so we’ll be trying that this week IF Paul can get a day off from work! (Better to do this on a weekday than a weekend.)

One thing I decided not to do, was attend the Royal Ascot races. That’s happening this week and we’re only about 20 minutes away. I could ride my bike there! But I’m not all that interested in horse racing… and I just couldn’t work out whether everyone really does have to wear dresses and a silly hat, or only those socialites in the posh stands! Anyway that’s one Brit tradition I guess I’ll pass on.

Well I’m sure there’s more I could write about but this is long enough for now!