Finally, I am getting round to writing about our magical week in August, in a “self-catering” cottage at the very very southwestern tip of Cornwall’s Penrith Peninsula.

We were only a few miles from Land’s End, and the cottage was walking distance to the incredible Coast Path where you can walk pretty much the entire coastline of Cornwall. I feel so fortunate to have found this simply wonderful dog-friendly cottage in such short notice. (I started looking in June and most properties were fully booked.) The cottage was on a farm in the middle of cultivated fields which went right up to the cliffs on the coast, incredibly quiet and serene. We brought our bicycles and aside from 2 days where we took the car to other parts of western Cornwall, we never left this area the whole time. Cycling and walking the coast path to the villages and beaches was enough.

Here’s the cottage and a view of the coast closest to our cottage:

The nearest village of any size was St Buryan. It stands on one of the higher points of the peninsula and all week as we were exploring around you could catch glimpses of the church tower from where ever we were. The village has an ancient crossroads marker (we had such fun spotting these out in the fields and along the roads), a post office, a teensy grocery, and a pub. I have become totally besotted with english pubs and we had a drink and a meal here one evening. It was only about a mile walk there using a public footpath across the fields: 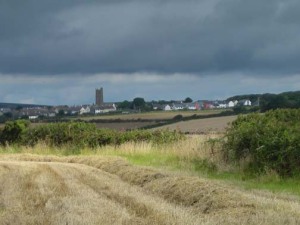 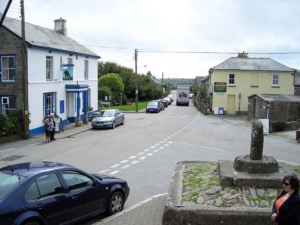 I took soooo many photos of the beaches. They are truly as gorgeous as everyone says. When the sun came out, they glowed aqua. I had a hard time deciding whether these beaches or the ones in Hawaii were more beautiful. There were dog-friendly beaches and we visited three of them. What a delight! It was far too cold to swim but I did wade in with the Boyz. I did find out that I don’t have beach dogs. After the first experience, they really didn’t want to go in the water except to wade a little bit. I think they don’t like the taste of the salt water, and even the little tiny waves were disconcerting. I was sure that KitKat the avid swimmin’ dog would love a beach but I guess not. When we let him go into a quiet river pool (with no waves) feeding into the ocean, he was all over it. But they both ran away from the waves just like little toddlers do. It was too cute! They did love chasing each other in the sand.

The rocky cliffs with their tin and copper mine remnants were a constant visual pull. I never wanted to leave the view of the sea. Fortunately the whole end of the peninsula where we were couldn’t have been more than 10 miles wide. We loved the feeling of being out of time in a slow, dreamy place. Even when it was misting rain, we were out in it. That just added to the dreamlike quality. There we were at the height of the summer holiday period, and we never felt crowded with tourists. The tour buses drove everyone straight down the highway from Penzance to Land’s End, and back. And then on somewhere else. And to think of what they missed by never getting off the main roads. There was a surprisingly high quality local art show in St Just, surfers at Sennen Cove, a circle of standing stones in a farm field a half mile from our cottage, seals in the surf off the beach, dairy cows in stone-walled green pastures, the last working coal-fired beam engine at a mine museum at Pendeen, rain-forest-like greenery and flowers (rhodendrons!) in the deep creek clefts down to the beaches. The best way to explore was by bike, because the one-lane roads bordered by deep hedge-rows weren’t so crazy to navigate as they were by car! 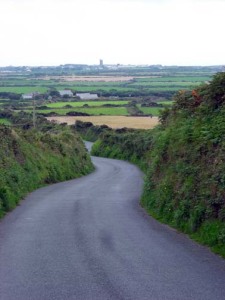 I love the UK for being so dog-friendly. On this trip, the Boyz went right with us into castles, pubs, museums, and beaches! We took memberships in both English Heritage and The National Trust, which between the two of them enable us to get into most of the great places and buildings and sites in England. Here they are going up the little spiral staircase at the Tudor Pendennis Castle. We ended up putting one of us at the top of the stairs and one of us at the bottom, and letting go the leashes! (I have never yet met a young dog that will not RUN stairs!)

On the way home, we stopped at two places that had a lot of personal meaning for me. First, we went to the china clay mines near St. Austell. This is the place where the Kaolin is mined for the bone china that my horses are made from! Kaolin is essential for china clays like porcelain. That was pretty cool to see the “home” of my chinas! Before these deposits were discovered (in the 1700s I think… without looking it up) they could only get it from China. They had a museum there and then you could go up and look at the current pit being mined. A lot differently from the way they used to do it originally:

The last stop of the trip before we left Cornwall, was Tintagel Castle on the north coast. This site, on its dramatic cliffs (though not much castle left), was a place I never dreamed I’d see. It has a big connection with the Arthurian legend, and that is my connection, too. When I was a teen, the first novels of the King Arthur legend I ever read were Mary Stewart’s “Merlin” series: The Crystal Cave, The Hollow Hills, The Last Enchantment, andThe Wicked Day. I have since read many many other versions of the Arthur story, but Stewart’s books remain my favorites. Her descriptions of Wales, Cornwall, Brittany and England of that post-Roman era were entirely responsible for me becoming such and Anglo-phile. One of the most dramatic parts of the story takes place on Tintagel and wow I still can’t believe I stood there. In fact because there is so little in the way of buildings there, you are completely free to imagine your own fantasy about what it might have looked like at the time Arthur supposedly lived. Here are a couple Tintagel photos: 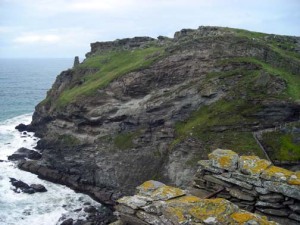 What a way to end such a splendid week! I felt a little sad to think that we probably wouldn’t be back to Cornwall because even with two years here, we have so many other places just in the UK that we want to get to. It truly was nothing like I expected it to be, based on what I read about how popular/busy/overrun a summer holiday destination it is. What I didn’t realize when I booked the cottage by pure luck (and the need for a good location to stay with dogs), was that we chose an area off the beaten path. We were able to feel more like a local than a tourist. The cozy cottage with its bedroom in the loft and the wood stove in the living room was a welcome end to each remarkable day.

Well, onwards! Next week we’re heading to the island of Malta, in the middle of the Mediterranean! (It’s between Sicily and Tunisia on the north coast of the African continent, in case you’re wondering!) We’ll get to check out another place defined by its connection to the sea. Plus immense historical sites! And best of all I think (now that the nights are getting pretty cool here already) Malta should be HOT, hooray!!