The refinishing of our house with stucco is done! We went from this: 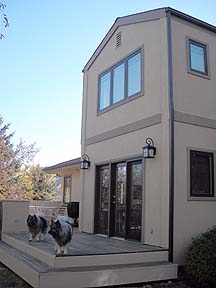 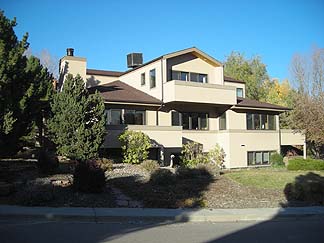 We couldn’t be happier with the looks and the workmanship. I think we might even see a difference in our energy bill, since the house is now really sealed up! Next spring we have to address getting new landscaping in, and we’re going to get rid of the ugly swamp cooler on the roof.

I am disappointed to report that when I picked up my irksome air compressor on Monday, it STILL was not starting up reliably. They got it running quietly again (it is supposed to be a “super-silent” model and it was running pretty loud) but it still only runs for about a half hour and then has trouble starting up again. Or just doesn’t at all. So I took it back yet again, and the guys at Boulder Electric Motor Co. finally got it to “fail” while I was there. They started mumbling electrical terms… something about needing a capacitor or a relay… so I left them to it. I think they like seeing me; it’s one of those gritty places full of machine parts and I don’t think they get women customers often. Anyway I feel confident that they finally saw what I have been talking about being wrong the last 2 months!! Though I was amazed at how many things needed repair on it overall. I guess I’m guilty of neglecting one of my very important tools. Lesson learned!

It is frustrating because my entire china glazing process hinges on being to use the airbrush. I’ve lost nearly 2 months now and am champing at the bit to get back to the work. I hope it’ll just be a day or two more for them to get it repaired. In the meantime, I guess I’ll have to work on the Clarity sculpture. It has been neglected since August, shame on me!!