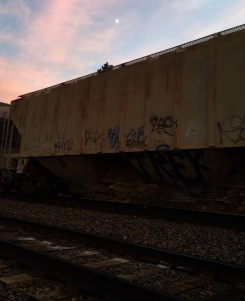 My father died four months ago yesterday. I am finally able to walk well enough (I broke my leg pretty badly on May 31st), so last night at sunset we went up to the beautiful and quiet grade crossing at Plainview, in the foothills south of Boulder. My dad’s favorite spot for train watching.

There’s a wonderful long view of the plains to the east, and the first steep slabs of the Rocky Mountains to the west. This is the main rail route that climbs out of Denver into the Rockies and west. We were there to scatter the last of his ashes right on the tracks.

Incredibly, as we were driving up we saw that there was a long freight train coming. We raced up and I had less than a minute to get the ashes on the tracks!

My vision was that every train passing over would take a bit of his ashes with them on their journey. So I was thrilled to actually see a train there when I placed them. (As I learned from many train watchings with my dad as a kid, often you wait around a lot and nothing comes.) It was the perfect train for dad; a mix of all kinds of freight cars instead of the long line of coal cars more usually seen.

I couldn’t tell which of two tracks the train was coming on, had zero time to decide, and I was initially disappointed that it was not on the one I chose for the ashes. But it was still pretty dramatic to have a train come through exactly when we were there.

It began to slow, and came to a stop right before us. To me it felt kind of dreamy/uncanny; there didn’t seem to be any reason for it to stop there. I was crying my eyes out and telling my dad farewell.

Then we realized that another train was coming the other way on the other track!!! It turned out to be only four engines coupled together. It thundered through just feet from us, right over the ashes, and I couldn’t help feeling eerily like it was some kind of honor guard salute just for dad.

After they went by, the other train moved on until the whole place was quiet again, just us and the sunset. Until the next train. Perfect, Dad.